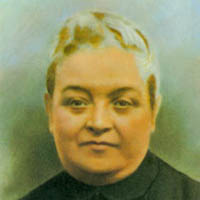 Roman martyrology: In Madrid, capital of Spain, Maria Dolores Rodriguez Sopeña, virgin, who showed her great Christian charity while devoting herself to the ones in need. In order to preach the Gospel and serve the poor and social workers, she founded the Social and Cultural Work Sopeña.

Born December 30, 1848 in Velez Rubio, Almería, Spain. The fourth of seven children born to Tomas Rodríguez Sopeña, a lawyer, magistrate and administrator, and Nicolasa Ortega Salomon.
Eye surgery at age eight left her with limited sight the rest of her life. A debutante at age 17, Maria did not care for the wordily life, and fearing that her parents would stop her, she secretly began working with the sick and poor. This was a time when a lady of her standing in society would never be found in the poor neighborhoods, never working with the poor herself. But Maria’s faith gave her endless confidence, and she was motivated by a desire to have “one family in Christ Jesus”.

In 1868 when she was 20, Maria’s father was transferred to Puerto Rico where he eventually became a state attorney; the rest of the famly moved to Madrid, Spain. There Maria found a spiritual advisor and began catechizing women in prisons, hospitals and Sunday schools. The entire family moved to Puerto Rico in 1872 during a time of schism and religious disruption, and she found a Jesuit priest to be her spiritual director. Maria’s poor sight ended an attempt to join the Sisters of Charity, and when she tried to work on her own, the religious upheaval limited her to visiting only the sick in the safety of a military hospital. When the situation settled she founded the Centers of Instruction and the Association of the Sodality of the Virgin Mary who staffed the Centers. There they taught reading, writing and religion, and provided medical help where needed.

Maria’s mother died, her father retired, and the family returned to Madrid in 1877. Maria became the matriarch of the family, found a new spiritual advisor, and resumed her work with the poor and sick. Following the death of her father in 1883, she joined a Salesian convent. That lasted ten days; she realized that the cloistered, contemplative life was not for her.

In 1885 Maria opened a center where the poor could bring social problems to be resolved, and which was similar to a modern half-way house, helping prisoners return to society. The terrible conditions of the poor that she witness led to the formation of the organization Works of the Doctrines; due to anti–clerical attitudes in the 20th century, these became known as the Center for the Workers. In 1892 she founded the Association of the Apostolic Laymen (Sopeña Lay Movement), and in 1893 she received government approval to expand her work into eight poor and crowded Madrid neighborhoods.

In 1896 she began working throughout Spain, founding additional Works of the Doctrines. She made a pilgrimage to Rome in 1900, and received approval to form a religious institute to continue the work of the Works and Association.
With eight companions and co-workers, she founded the Ladies of Catechistical Institute on 24 September 1901 in Toledo, Spain. She founded the Social and Cultural Work Sopeña (OSCUS) which received government approval in 1902, papal approval in 1907, and is today known as the Sopeña Catechetical Institute. Maria was chosen Superior General of community in 1910, and they expanded into the Americas in 1917. Her legacy continues today in the Sopeña Catechetical Institute, The Sopeña Lay Movement and the Sopeña Social and Cultural Work working in Spain, Italy, Argentina, Colombia, Cuba, Chile, Ecuador, Mexico and the Dominican Republic.