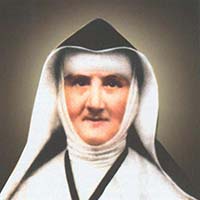 Roman martyrology: (1782–1876) Belgian Religious Sister who founded the religious congregation of the Daughters of the Cross of Liége in response to the lack of education in her homeland in the chaos resulting from the French Revolution.

Foundress of the Congregation of the Daughters of the Cross of Liège.

27 February 1782 in Liège, Belgium as Jeanne.  One of seven children born to the secretary of the last prince–bishop of Liège, Belgium.

She could read and write by the age of four but she was drawn to religion from an early age. It took her 50 years to finally found her vocation: Founded the Congregation of the Daughters of the Cross of Liège in 1833, and served as its Superior General until her death; at that point, the Congregation had more than 50 houses and more than 900 sisters in service to the weak and poor.

She died on 7 January 1876 in Liège, Belgium of natural causes.