Catechism
Part one: The Profession of Faith
I. He Will Come Again in Glory
Article 7 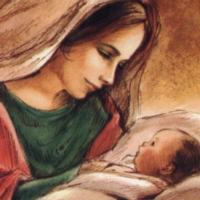 I. He Will Come Again in Glory

Christ already reigns through the Church. . .

668 "Christ died and lived again, that he might be Lord both of the dead and of the living."548 Christ's Ascension into heaven signifies his participation, in his humanity, in God's power and authority. Jesus Christ is Lord: he possesses all power in heaven and on earth. He is "far above all rule and authority and power and dominion", for the Father "has put all things under his feet."549Christ is Lord of the cosmos and of history. In him human history and indeed all creation are "set forth" and transcendently fulfilled.550

669 As Lord, Christ is also head of the Church, which is his Body.551 Taken up to heaven and glorified after he had thus fully accomplished his mission, Christ dwells on earth in his Church. the redemption is the source of the authority that Christ, by virtue of the Holy Spirit, exercises over the Church. "The kingdom of Christ (is) already present in mystery", "on earth, the seed and the beginning of the kingdom".552

670 Since the Ascension God's plan has entered into its fulfilment. We are already at "the last hour".553 "Already the final age of the world is with us, and the renewal of the world is irrevocably under way; it is even now anticipated in a certain real way, for the Church on earth is endowed already with a sanctity that is real but imperfect."554 Christ's kingdom already manifests its presence through the miraculous signs that attend its proclamation by the Church.555
. . . until all things are subjected to him

671 Though already present in his Church, Christ's reign is nevertheless yet to be fulfilled "with power and great glory" by the King's return to earth.556 This reign is still under attack by the evil powers, even though they have been defeated definitively by Christ's Passover.557 Until everything is subject to him, "until there be realized new heavens and a new earth in which justice dwells, the pilgrim Church, in her sacraments and institutions, which belong to this present age, carries the mark of this world which will pass, and she herself takes her place among the creatures which groan and travail yet and await the revelation of the sons of God."558 That is why Christians pray, above all in the Eucharist, to hasten Christ's return by saying to him:559 Maranatha! "Our Lord, come!"560

672 Before his Ascension Christ affirmed that the hour had not yet come for the glorious establishment of the messianic kingdom awaited by Israel561which, according to the prophets, was to bring all men the definitive order of justice, love and peace.562 According to the Lord, the present time is the time of the Spirit and of witness, but also a time still marked by "distress" and the trial of evil which does not spare the Church563 and ushers in the struggles of the last days. It is a time of waiting and watching.564

The glorious advent of Christ, the hope of Israel

673 Since the Ascension Christ's coming in glory has been imminent,565 even though "it is not for you to know times or seasons which the Father has fixed by his own authority."566. This eschatological coming could be accomplished at any moment, even if both it and the final trial that will precede it are "delayed".567

674 The glorious Messiah's coming is suspended at every moment of history until his recognition by "all Israel", for "a hardening has come upon part of Israel" in their "unbelief" toward Jesus.568 St. Peter says to the Jews of Jerusalem after Pentecost: "Repent therefore, and turn again, that your sins may be blotted out, that times of refreshing may come from the presence of the Lord, and that he may send the Christ appointed for you, Jesus, whom heaven must receive until the time for establishing all that God spoke by the mouth of his holy prophets from of old."569 St. Paul echoes him: "For if their rejection means the reconciliation of the world, what will their acceptance mean but life from the dead?"570 The "full inclusion" of the Jews in the Messiah's salvation, in the wake of "the full number of the Gentiles",571 will enable the People of God to achieve "the measure of the stature of the fullness of Christ", in which "God may be all in all".572

675 Before Christ's second coming the Church must pass through a final trial that will shake the faith of many believers.573 The persecution that accompanies her pilgrimage on earth574 will unveil the "mystery of iniquity" in the form of a religious deception offering men an apparent solution to their problems at the price of apostasy from the truth. the supreme religious deception is that of the Antichrist, a pseudo-messianism by which man glorifies himself in place of God and of his Messiah come in the flesh.575

676 The Antichrist's deception already begins to take shape in the world every time the claim is made to realize within history that messianic hope which can only be realized beyond history through the eschatological judgement. the Church has rejected even modified forms of this falsification of the kingdom to come under the name of millenarianism,576 especially the "intrinsically perverse" political form of a secular messianism.577

677 The Church will enter the glory of the kingdom only through this final Passover, when she will follow her Lord in his death and Resurrection.578 The kingdom will be fulfilled, then, not by a historic triumph of the Church through a progressive ascendancy, but only by God's victory over the final unleashing of evil, which will cause his Bride to come down from heaven.579 God's triumph over the revolt of evil will take the form of the Last Judgement after the final cosmic upheaval of this passing world.580


577 Pius XI, Divini Redemptoris, condemning the "false mysticism" of this
"counterfeit of the redemption of the lowly"; cf. GS 20-21.