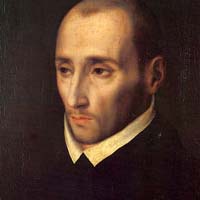 Roman martyrology: Archbishop and Vice-roy of Valencia, Spain. He was the son of the duke of Alcala, and was born in Seville, Spain. Ordained a priest in 1557, he became archbishop in 1568, serving for more than four decades until he died on January 6, in Valencia. John ordered the Moors deported from his see. He was revered by Pope Pius V and King Philip II of Spain.

John was the son of Peter de Ribera, the duke of Alcalá (one of the highest grandees in Spain), and viceroy of Naples, Italy. More importantly, Duke Peter was a devout Christian and raised his son in Christian values. John was educated at the university of Salamanca and ordained to the priesthood in 1557. He remained at Salamanca as professor of theology.

His gifts became widely known and gained him the esteem of Pope Pius V and Philip II of Spain. Much to his dismay, John was appointed bishop of Badajoz in 1562. For six years he discharged his duties admirably and with such zeal that he was then transferred to the archbishopric of Valencia, again against his wishes. A few months later, filled with consternation at the languid faith and relaxed morals of the province, which was the stronghold of the Moriscos, he wrote begging to be allowed to resign, but the pope would not consent. For the next 42 years until his death, the archbishop struggled to support cheerfully a load of responsibility that almost crushed him. In his old age, that burden was increased with the added dignity of viceroy of that province imposed upon him by Philip III.

Archbishop John viewed with intense alarm what he regarded as the dangerous activities of the Moriscos. He was one of the advisers who were mainly responsible for the edict of 1609 which enforced their deportation from Valencia. He died after a log illness, patiently borne, at the College of Corpus Christi, which he himself had founded and endowed. Many miracles were attributed to his intercession.

Although not everyone regards him as an enlightened statesman, each should admire his conscientious devotion to duty and his heroic patience in bearing the responsibilities of his office. It was these qualities that were recalled in the decree of beatification. It pronounced upon him the personal virtues and miracles of a servant of God; however, it does not constitute approbation of all his public acts or of his political views (Benedictines, Walsh).