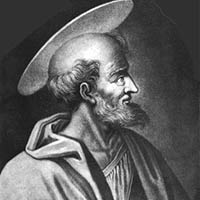 Roman Martyrology: The first pope depicted with a square nimbus in a contemporary mosaic, St. Simplicius was born in Tivoli and was elected to the papacy in 468. Simplicius opposed monothelitism and built churches. He wanted to maintain papal authority in the Western Empire in spite of the collapse of civil authority. Simplicius died, after a long illness, in 483.

St. Simplicius became pope in 468. Sometimes it seemed to him that he was all-alone in trying to correct evils that were everywhere. Conquerors had taken over vast territories. Invaders occupied even Rome itself. The people were hungry and poor. They had been taxed and robbed by former Roman officials. Poverty prowled the streets and removed all joy. The new Conquer- ers at least had not asked for taxes. Pope Simplicius tried in every way to uplift his people and to work for their good. He was always there for them, no matter how small his efforts seemed to him. And because he was holy, he never gave up. More than by words, he taught with the example of his holy life.

St. Simplicius had to suffer greatly as pope for another reason as well. Some of his own Christians stubbornly held on to their wrong opinions. Then with great sorrow, St. Simplicius had to put them out of the Church. When he corrected people who were doing wrong, he was kind and humble.

Simplicius was pope for fifteen years and eleven months. Then the Lord called him to receive the reward of his labors. St. Simplicius died in 483 and was buried in St. Peter's Basilica in Rome.