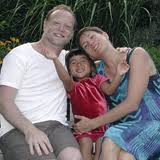 1. Marrying as a teenager is the highest known risk factor for divorce.

2. People are most likely to find a future marriage partner through an introduction by family, friends, or acquaintances.

Despite the romantic notion that people meet and fall in love through chance or fate, evidence suggests that social networks are important in bringing together individuals of similar interests and backgrounds. According to a large-scale national survey, almost 60% of married people were introduced by family, friends, co-workers or other acquaintances.

3. People who are similar in their values, backgrounds and life goals are more likely to have a successful marriage.

Opposites may attract but they may not live together harmoniously as married couples. People who share common backgrounds and similar social networks are better suited as marriage partners than people who are very different in their backgrounds and networks.

4. Women have a significantly better chance of marrying if they do not become single parents before marrying.

5. Women and men who are college-educated are more likely to marry, and less likely to divorce, than people with lower levels of education.

6. Living together before marriage has not proved useful as a “trial marriage.”

People who have multiple cohabiting relationships before marriage are more likely to experience marital conflict, marital unhappiness and eventual divorce than people who do not cohabit before marriage. Researchers attribute some but not all of these differences to the characteristics of people who cohabit, the so-called “selection effect,” rather than to the experience of cohabiting itself. It has been suggested that the negative effects of cohabitation on future marital success may diminish as living together becomes a common experience. However, according to one study of couples who were married between 1981 and 1997, the negative effects persist among younger cohorts, supporting the view that the cohabitation experience itself contributes to problems in marriage.

Married people do better economically. Men become more productive after marriage; they earn between ten and forty percent more than single men with similar education and job histories. Marital social norms that encourage healthy, productive behavior and wealth accumulation play a role. Some of the greater wealth of married couples results from their more efficient specialization and pooling of resources, and because they save more. Married people also receive more money from family members than the unmarried (including cohabiting couples), probably because families consider marriage more permanent and binding than a cohabiting union.

8. People who are married are more likely to have emotionally and physically satisfying sex lives than single people or those who live together.

Contrary to the popular belief that married sex is boring and infrequent, married people report higher levels of sexual satisfaction than sexually active singles and cohabiting couples, according to the most comprehensive and recent survey of sexuality. Forty-two percent of wives said that they found sex emotionally and physically satisfying, compared to just 31% of single women who had a sex partner. Forty-eight percent of husbands said sex was satisfying emotionally, compared to just 37% of cohabiting men. The higher level of commitment in marriage is probably the reason for the high level of reported sexual satisfaction. Marital commitment contributes to a greater sense of trust and security, less drug and alcohol-infused sex, and better communication between spouses.

9. People whose parents divorced are slightly less likely to marry. They are much more likely to divorce when they do marry.

According to one study the divorce risk nearly triples if one marries someone who also comes from a home where the parents divorced. The increased risk is much lower, however, if the marital partner is someone who grew up in a happy, intact family.

10. For large segments of the population, the risk of divorce is far below fifty percent.

Although the overall divorce rate in America remains close to fifty percent of all marriages, it has been dropping over the past two decades. The risk of divorce is far below fifty percent for educated people going into their first marriage, and lower still for people who wait to marry at least until their mid-twenties, haven’t lived with many different partners prior to marriage, or are strongly religious and marry someone of the same faith.