Family
Marriage
Why Married Parents are Important for Children
Marriage

Society assumed that children needed this stability in order to thrive. 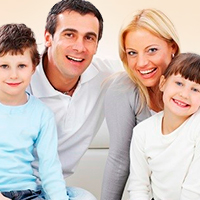 In the not too distant past this question would never have been asked. Of course children should be born into a loving marriage relationship. Or, if children were born out of wedlock, they would be adopted and raised by generous, caring couples. Society assumed that children needed this stability in order to thrive.

U.S. society has changed, however, and so have attitudes towards marriage and children. Society no longer assumes that married parents are the norm. At the same time, social science research has confirmed the wisdom and value of traditional practice. Children do better when raised by their married mother and father.

Some facts:
•    In 2004, 68% of children still lived with two married parents, 23% lived with only their mothers, 5% lived with only their fathers, and 4% lived with neither of their parents (Family Structure and Children’s Living Arrangements, Federal Interagency Forum on Child and Family Statistics.
•    Only 45% of all teenage children live with their married biological parents (The Positive Effects of Marriage: A Book of Charts, Patrick Fagan).
•    Children in single- parent families comprise 27% of all American children, yet they account for 62% of all poor children (Ibid).
•    The three most significant reasons children are raised without their married mother and father are unwed pregnancy, cohabitation, and divorce (The State of Our Unions: The Social Health of Marriage in America 2006, David Popenoe and Barbara Whitehead, National Marriage Project, print version, p.33).
Some questions:
•    Given that more than 32% of children are not living with both their parents, what impact does this have on the children?
•    Are children suffering or are they resilient? Can they rebound from divorce and emerge even stronger? Or are they at-risk for long-term negative effects?
•    Are children better off with one parent who loves them than two parents who are bickering and fighting?


Some answers from the Social Sciences:
1    Children raised in intact married families:
2    are more likely to attend college
3    are physically and emotionally healthier
4    are less likely to be physically or sexually abused
5    are less likely to use drugs or alcohol and to commit delinquent behaviors
6    have a decreased risk of divorcing when they get married
7    are less likely to become pregnant/impregnate someone as a teenager
8    Children receive gender specific support from having a mother and a father. Research shows that particular roles of mothers (e.g., to nurture) and fathers (e.g., to discipline), as well as complex biologically rooted interactions, are important for the development of boys and girls (Marriage and the Public Good: Ten Principles, 2006).
9    A child living with a single mother is 14 times more likely to suffer serious physical abuse than is a child living with married biological parents. A child whose mother cohabits with a man other than the childís father is 33 times more likely to suffer serious physical child abuse (The Positive Effects of Marriage: A Book of Charts, Patrick Fagan).
10    In married families, about one- third of adolescents are sexually active. For teenagers in stepfamilies, cohabiting households, divorced families, and those with single unwed parents, the percentage rises above one-half (The Positive Effects of Marriage: A Book of Charts, Patrick Fagan).
11    Children of divorce experience lasting tension as a result of the increasing differences in their parents values and ideas. At a young age they must make mature decisions regarding their beliefs and values. Children of so- called “good divorces” fare worse emotionally than children who grew up in an unhappy but “low-conflict” marriage (Ten Findings from a National Study on the Moral and Spiritual Lives of Children of Divorce, Elizabeth Marquardt).

Does this mean that it’s better to stay in a bad marriage than to get a divorce?
It depends. Statistics are generalizations. Many loving parents are able to compensate for the traumatic effect of divorce on a child. On the other hand, the research cited above should warn parents to slow down and proceed with caution before deciding that divorce is the best solution for the child.

Parents’ marital unhappiness and discord negatively affect their children’s well- being, but so does the experience of going through a divorce. Children in very high conflict homes may benefit by being removed from the conflict. In lower-conflict marriages, and perhaps as many as two-thirds of divorces are of this type, the situation of the children can be made much worse following a divorce. These children benefit if parents can stay together and work out their problems rather than get a divorce (Paul R. Amato and Alan Booth, A Generation at Risk, Cambridge, MA: Harvard University Press, 1997).

All marriages have their ups and downs. Recent research using a large national sample found that 86% of people who were unhappily married in the late 1980s, and stayed with the marriage, were happier when interviewed five years later. Indeed, 60% of the formerly unhappily married couples rated their marriages as either “very happy” or “quite happy” (Unpublished research by Linda J. Waite, cited in Linda J. Waite and Maggie Gallagher, The Case for Marriage, New York: Doubleday, 2000, p.148).