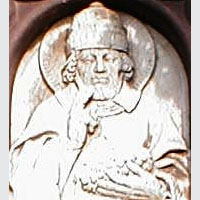 Roman martyrology: In Dijon, Burgundy (today France), saint Gregorio, who, after having ruled the region of Autun, was ordained bishop of Langres.
Etymology: From the latin meaning "watchful, alert".

He was one of the principal senators of Autun, France. Married, and the father of Saint Tertricus of Langres. Great-uncle of Saint Gregory of Tours. Widower; after his wife’s death, he devoted himself to God.
For his singular virtues, he was compelled from his private penitential life, and consecrated bishop of Langres at the age of 57, which see he governed with admirable prudence and zeal thirty-three years, sanctifying his pastoral labors by the most profound humility, assiduous prayer, and extraordinary abstinence and mortification.

An incredible number of infidels were converted by him from idolatry, and worldly Christians from their disorders. He died about the beginning of the year 541, but some days after the Epiphany. Out of devotion to St. Benignus, he desired to be buried near that saint’s tomb at Dijon, which town was then in the diocess of Langres, and had often been the place of his residence. This was executed by his virtuous son Tetricus, who succeeded him in his bishopric.

Though he was known as a strict and severe civil authority, he was a gentle, understanding and charitable minister.