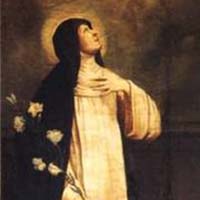 It was Stephanie's o Stephana’s good fortune always to live with holy people and to have the edifying example of many holy friends.

Born 1457 at Soncino, Italy to pious parents; her father became a Dominican tertiary while Stephana was very young. She was taught her catechism by the stigmatic Blessed Matthew Carrieri who lived at the nearby Dominican convent; though she was too small to understand, he told her that she was to be his spiritual heiress. She began receiving visions of Dominican saints from age seven, at which point she made personal vows of poverty, chastity and obedience.

When Stephana was 14, Blessed Matthew Carrieri died, and, shortly thereafter, appeared to her. Wounded with a terrible pain, the girl realized that she had received the sacred stigmata. This was the legacy the Blessed Matthew had promised her. Now she intensified her penances, and she meditated almost ceaselessly on the Passion. In addition to her physical endurance of the Passion, she had to undergo a spiritual desolation and dryness. This aridity lasted forty years.

At age 15, Stephana was given the Tertiary habit of the Dominicans at Soncino and devoted herself to ministering to the poor and sick. Some years later, she founded a community (San Paolo) of Third Order sisters in her native town of Soncino and became its first abbess. As a Tertiary, she had been able to go out to minister to others; as a member of a regular community, she continued her charity, dispensing both material and spiritual riches. People of all classes came to consult her and ask for her prayers; Saint Angela Merici and the Dominicans, Augustine of Biella and Blessed Osanna of Mantua, were among these.

She lived in constant union with God, and her every action had upon it the imprint of His favors. Keeping an almost perpetual fast, she punished her body with instruments of penance. Her devotion to the Blessed Sacrament and to the Passion of Our Lord was intense. She could discuss the most profound truths of mystical theology, and had the ability to read the hearts and minds of those around her, and to prophesy future events. She was credited with performing numerous miracles of healing.

Of the saints of the order to whom she had a great devotion, she was particularly drawn to Saint Thomas Aquinas, for one time, to overcome temptation of thought against purity, she threw herself upon a cartload of thorns. Rising exhausted from this penance, she prayed fervently to Saint Thomas, and, like that great saint, she was girded by angels with a cord, which they tied so tightly around her waist that she cried out in pain.

Though she had no formal theological training, she could discuss mystical theology at the most profound level. She could read the hearts and minds of the people around her, and had the gift of prophecy and healing. She lived in a nearly continuous fast, and inflicted severe penances on herself. Stephana accurately predicted the date of her own death on 2 January 1530 of at Soncino, Italy of natural causes.