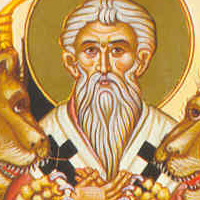 Also called Theophorus (ho Theophoros); born in Syria, around the year 50; died at Rome between 98 and 117.
More than one of the earliest ecclesiastical writers have given credence, though apparently without good reason, to the legend that Ignatius was the child whom the Savior took up in His arms, as described in Mark, ix, 35. It is also believed, and with great probability, that, with his friend Polycarp, he was among the auditors of the Apostle St. John. If we include St. Peter, Ignatius was the third Bishop of Antioch and the immediate successor of Evodius (Eusebius, "Hist. Eccl.", II, iii, 22). Theodoret ("Dial. Immutab.", I, iv, 33a, Paris, 1642) is the authority for the statement that St. Peter appointed Ignatius to the See of Antioch. St. John Chrysostom lays special emphasis on the honor conferred upon the martyr in receiving his episcopal consecration at the hands of the Apostles themselves ("Hom. in St. Ig.", IV. 587). Natalis Alexander quotes Theodoret to the same effect (III, xii, art. xvi, p. 53).

All the sterling qualities of ideal pastor and a true soldier of Christ were possessed by the Bishop of Antioch in a preeminent degree. Accordingly, when the storm of the persecution of Domitian broke in its full fury upon the Christians of Syria, it found their faithful leader prepared and watchful. He was unremitting in his vigilance and tireless in his efforts to inspire hope and to strengthen the weaklings of his flock against the terrors of the persecution. The restoration of peace, though it was short-lived, greatly comforted him. But it was not for himself that he rejoiced, as the one great and ever-present wish of his chivalrous soul was that he might receive the fullness of Christian discipleship through the medium of martyrdom. His desire was not to remain long unsatisfied. Associated with the writings of St. Ignatius is a work called "Martyrium Ignatii ", which purports to be an account by eyewitnesses of the martyrdom of St. Ignatius and the acts leading up to it. In this work, which such competent Protestant critics as Pearson and Ussher regard as genuine, the full history of that eventful journey from Syria to Rome is faithfully recorded for the edification of the Church of Antioch. It is certainly very ancient and is reputed to have been written by Philo, deacon of Tarsus, and Rheus Agathopus, a Syrian, who accompanied Ignatius to Rome. It is generally admitted, even by those who regarded it as authentic, that this work has been greatly interpolated. Its most reliable form is that found in the "Martyrium Colbertinum" which closes the mixed recension and is so called because its oldest witness is the tenth-century Codex Colbertinus (Paris).

According to these Acts, in the ninth year of his reign, Trajan, flushed with victory over the Scythians and Dacians, sought to perfect the universality of his dominion by a species of religious conquest. He decreed, therefore, that the Christians should unite with their pagan neighbors in the worship of the gods. A general persecution was threatened, and death was named as the penalty for all who refused to offer the prescribed sacrifice. Instantly alert to the danger that threatened, Ignatius availed himself of all the means within his reach to thwart the purpose of the emperor. The success of his zealous efforts did not long remain hidden from the Church's persecutors. He was soon arrested and led before Trajan, who was then sojourning in Antioch. Accused by the emperor himself of violating the imperial edict, and of inciting others to like transgressions, Ignatius valiantly bore witness to the faith of Christ. If we may believe the account given in the "Martyrium", his bearing before Trajan was characterized by inspired eloquence, sublime courage, and even a spirit of exultation. Incapable of appreciating the motives that animated him, the emperor ordered him to be put in chains and taken to Rome, there to become the food of wild beasts and a spectacle for the people.

That the trials of this journey to Rome were great we gather from his letter to the Romans (par. 5): "From Syria even to Rome I fight with wild beasts, by land and sea, by night and by day, being bound amidst ten leopards, even a company of soldiers, who only grow worse when they are kindly treated." Despite all this, his journey was a kind of triumph. News of his fate, his destination, and his probable itinerary had gone swiftly before. At several places along the road his fellow-Christians greeted him with words of comfort and reverential homage. It is probable that he embarked on his way to Rome at Seleucia, in Syria, the nearest port to Antioch, for either Tarsus in Cilicia, or Attalia in Pamphylia, and thence, as we gather from his letters, he journeyed overland through Asia Minor. At Laodicea, on the River Lycus, where a choice of routes presented itself, his guards selected the more northerly, which brought the prospective martyr through Philadelphia and Sardis, and finally to Smyrna, where Polycarp, his fellow-disciple in the school of St. John, was bishop. The stay at Smyrna, which was a protracted one, gave the representatives of the various Christian communities in Asia Minor an opportunity of greeting the illustrious prisoner, and offering him the homage of the Churches they represented. From the congregations of Ephesus, Magnesia, and Tralles, deputations came to comfort him. To each of these Christian communities he addressed letters from Smyrna, exhorting them to obedience to their respective bishops, and warning them to avoid the contamination of heresy. These, letters are redolent with the spirit of Christian charity, apostolic zeal, and pastoral solicitude. While still there he wrote also to the Christians of Rome, begging them to do nothing to deprive him of the opportunity of martyrdom.

From Smyrna his captors took him to Troas, from which place he dispatched letters to the Christians of Philadelphia and Smyrna, and to Polycarp. Besides these letters, Ignatius had intended to address others to the Christian communities of Asia Minor, inviting them to give public expression to their sympathy with the brethren in Antioch, but the altered plans of his guards, necessitating a hurried departure, from Troas, defeated his purpose, and he was obliged to content himself with delegating this office to his friend Polycarp. At Troas they took ship for Neapolis. From this place their journey led them overland through Macedonia and Illyria. The next port of embarkation was probably Dyrrhachium (Durazzo). Whether having arrived at the shores of the Adriatic, he completed his journey by land or sea, it is impossible to determine. Not long after his arrival in Rome he won his long-coveted crown of martyrdom in the Flavian amphitheater. The relics of the holy martyr were borne back to Antioch by the deacon Philo of Cilicia, and Rheus Agathopus, a Syrian, and were interred outside the gates not far from the beautiful suburb of Daphne. They were afterwards removed by the Emperor Theodosius II to the Tychaeum, or Temple of Fortune which was then converted into a Christian church under the patronage of the martyr whose relics it sheltered. In 637 they were translated to St. Clement's at Rome, where they now rest. The Church celebrates the feast of St. Ignatius on 1 February.

The character of St. Ignatius, as deduced from his own and the extant writings of his contemporaries, is that of a true athlete of Christ. The triple honor of apostle, bishop, and martyr was well merited by this energetic soldier of the Faith. An enthusiastic devotion to duty, a passionate love of sacrifice, and an utter fearlessness in the defense of Christian truth, were his chief characteristics. Zeal for the spiritual well-being of those under his charge breathes from every line of his writings. Ever vigilant lest they be infected by the rampant heresies of those early days; praying for them, that their faith and courage may not be wanting in the hour of persecution; constantly exhorting them to unfailing obedience to their bishops; teaching them all Catholic truth ; eagerly sighing for the crown of martyrdom, that his own blood may fructify in added graces in the souls of his flock, he proves himself in every sense a true, pastor of souls, the good shepherd that lays down his life for his sheep.