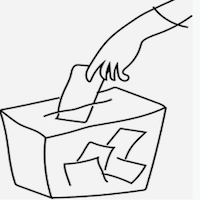 Democracy assumes that every human being, after reaching the age provided for by law, can decide what would be best for his country. That is why the axiom "one man, one vote" has become a kind of postulate that would allow everyone, theoretically, to participate in the management of the state and the different levels of government.

In reality, thousands of human beings look at public affairs from a confusing perspective. They are unclear what the specific situation of the economy is. They do not know which groups are fighting to control access and power management mechanisms. They do not fully understand the electoral programs of one or the other, and often suspect (unfortunately, rightly) that these programs are unrealizable or simply offered as bait to get more votes.

Faced with this situation, thousands of men and women from the so-called democratic countries yearn to find competent guides and experts, with “authority”, to receive from them some light on the situation in which they live, on the most urgent needs to take to the State in a good way, on the viability and success of the electoral programs in Liza.

Then questions arise with difficult solution: are there such guides? If it exists, how to identify them? What guarantees do you offer for honesty and competence? Doesn't there remain a risk that the guides are also manipulated or manipulative, that they will deceive people into living subjugated to the most aggressive power groups?

The problem that these questions pick up is as old as humanity. Plato had already noticed how important it is to have a knowledge capable of distinguishing between a good doctor and a bad doctor, to entrust our health to the former and to evade the deceptions or mistakes of the latter. The same, according to Plato, applied to the art of navigation, to war, politics, and to many other areas of social life.

But, how can we identify those who have authority, competence, wisdom, and honesty? How can we distinguish them from the deceiving, incompetent, skilled sophists to present as if it were a good program which will actually lead a country to ruin?

The questions remain, more in a confusing world like ours, where some (not all) opportunities to "sell" their programs and ideas to voters are offered, even with the help of public funds.

In front of this situation, we feel the need to open the democratic world to a horizon that goes beyond the struggle to win votes. In this horizon it will be possible to find ways to train expert men and women. With their studies and, above all, with the honesty expected of them, they will have enough "authority" to provide light when choosing, from the criteria of participatory democracy, the best ways to organize states according to criteria of justice and sound efficiency.