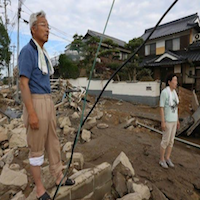 As rescuers in Japan race to find survivors after torrential rain caused floods and landslides that killed at least 119 people, Pope Francis expressed his grief for all those affected by the tragedy.

Pope Francis expressed his "heartfelt solidarity" with all those affected by the worst flood disaster to strike western Japan in 35 years and said he is praying “especially for the repose of the deceased, the healing of those injured and the consolation of all those who grieve”.

In a telegramme signed by Vatican Secretary of State, Cardinal Pietro Parolin on the Pope's behalf, Francis said he is "deeply saddened to learn of the loss of life and of the injury caused by the serious floods following the heavy rains in Japan".

Officials said on Monday that at least 119 people have been killed and dozens are still missing after torrential rain unleashed floods and landslides that have forced several million from their homes.

The Pope also offered “encouragement to the civil authorities and all those involved in the search and rescue efforts as they assist the victims of this disaster” and upon all he invoked “abundant blessings”.

The Meteorological Agency is warning that that landslides and flooding continue to pose a danger and the number of casualties is expected to rise further.

Many people are believed to be stranded in their homes where roads have been cut off by the flooding.

As of Monday morning, around 23,000 people were sheltered in evacuation centers, and Prime Minister Shinzo Abe announced that a special disaster response unit has been boosted to 73,000 and said it is “putting in utmost efforts to save lives.”

Abe also cancelled a planned trip to Europe and the Middle East as the government stepped up rescue operations, and is reportedly arranging visits to areas hit hard by the massive flooding and landslides that began last Thursday.