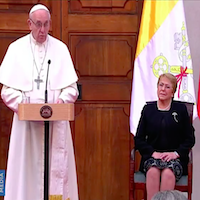 In the first official encounter of his apostolic visit to Chile, Pope Francis expressed his shame and sorrow for the child sexual abuse crisis that occurred at the hands of clergy of the Catholic Church.

“I feel bound to express my pain and shame at the irreparable damage caused to children by some ministers of the Church,” the Pope said Jan. 16.

Speaking to the country's civil leaders, he said “I am one with my brother bishops, for it is right to ask for forgiveness and make every effort to support the victims, even as we commit ourselves to ensuring that such things do not happen again.”

The Church in both Chile and Peru has faced strong fallout from sexual abuse scandals, which have damaged the Church’s image and created a strong distrust of the hierarchy.

The major case in Chile is that of Fr. Fernando Karadima, who once led a lay movement from his parish in El Bosque. He was found guilty of sexually abusing minors in 2011.

The Pope’s meeting with the Chilean authorities, civil society, and diplomatic corps, was his first official encounter during his apostolic trip to Chile and Peru Jan. 15-22.

He will be in Chile through Jan. 18, visiting Santiago, Temuco, and Iquique. During the visit he will have lunch with the Mapuche residents of the Araucania region, and visit the Pontifical Catholic University of Chile.

From Chile he will go to Peru, visiting Lima, Puerto Maldonado, and Trujillo. He will meet with indigenous Amazonians and pray before the relics of Peruvian saints before returning to Rome Jan. 22.

In his speech the Pope said that the future of Chile depends on the ability of both its people and leaders to listen to one another, preserving the country’s ethnic, cultural and historical diversity from “all partisan spirit or attempts at domination,” which threaten the common good.

He enumerated the different groups of people he believes most need to be listened to: children, the unemployed, native peoples, migrants, youth, and the elderly.

“It is necessary to listen,” he said. “To listen to the native peoples, often forgotten, whose rights and culture need to be protected lest that part of this nation’s identity and richness be lost.” As well as migrants, who come to this country in search of a better life.

We should also listen to young people and their desire for greater opportunities, he continued, especially in education, “so that they can take active part in building the Chile they dream of.”

Quoting the Te Deum homily of deceased Chilean Cardinal Silva Henríquez, the Pope said that “We – all of us – are builders of the most beautiful work: our homeland. The earthly homeland that prefigures and prepares the (heavenly) homeland that has no borders.”

The Pope encouraged people to strive to make Chile a place that welcomes everyone, and where everyone feels called to join in helping to build up the nation.

“Yours is a great and exciting challenge: to continue working to make this democracy, as your forebears dreamed, beyond its formal aspects, a true place of encounter for all,” Francis said.

A visit to the saint’s shrine is part of the Pope’s schedule at the end of the day, during a private meeting he’ll have with local Jesuits.

“Each new generation must take up the struggles and attainments of past generations, while setting its own sights even higher,” he said. “Goodness, together with love, justice and solidarity, are not achieved once and for all; they have to be realized each day.”

"It is not possible to settle for what was achieved in the past and complacently enjoy it, as if we could somehow ignore the fact that many of our brothers and sisters still endure situations of injustice that none of us can ignore.