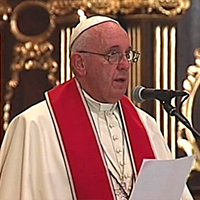 Pope Francis said Wednesday that moments of silence in the Mass should be intentional times of prayer, recollection and communion with God, rather than being viewed as times to just be quiet or not speak.

“Silence is not reduced to the absence of words, but (is) the availability to listen to other voices: that of our heart and, above all, the voice of the Holy Spirit,” the Pope said Jan. 10.

In silence, then, we discover “the importance of listening to our soul and then opening it to the Lord.”

Continuing his general audience catechesis on the topic of the Mass, Pope Francis reflected on the nature of the different moments of silence found within the celebration, especially in the recitation of the collect.

The collect, which is prayed after the Gloria, or if the Gloria is omitted, following the Penitential Act, is a short prayer which goes from praise to supplication, and is generally inspired from the day’s Scripture passages, the Pope said.

This prayer, which varies according to the day and time in which the Mass is being said, begins with the priest saying to the people, “Let us pray,” followed by a brief silence.

“I strongly recommend priests observe this moment of silence, which without wanting to, we risk neglecting,” Francis noted.

In this moment the congregation is exhorted to come together in silence, to become aware of the presence of God, and to bring out, “each one in his own heart, the personal intentions with which he participates in Mass.”

“Perhaps we come from days of toil, of joy, of sorrow, and we want to tell the Lord, to invoke his help, to ask that he be near us; we have family members and friends who are ill or who are going through difficult trials; we wish to entrust to God the fate of the Church and the world.”

“For this we need the brief silence beforehand, that the priest, gathering the intentions of each one, expresses in a loud voice to God, in the name of all, the common prayer that concludes the rites of introduction, making, indeed, a ‘collection’ of individual intentions.”

These silences are written right into the General Instruction of the Roman Missal, the Pope pointed out. There it says that in the Penitential Act and again after the invitation to pray, everyone is supposed to spend a moment in recollection.

And in the silences following a reading or the homily, everyone is called to meditate briefly on what they have heard. After Communion they should praise and pray to God in their hearts.

The Gloria, another kind of prayer, is either recited or sung before the collect on Sundays, except during Lent and Advent, and on feasts and solemnities.

Here, “the feelings of praise that run through the hymn are intertwined with the confident pleading of divine benevolence, to end with the Trinitarian doxology, which characterizes the whole liturgical celebration,” he said.

The recitation or singing of the Gloria, the Pope emphasized, “constitutes an opening of the earth to heaven.”

By meditating on the prayers of the Mass, the liturgy can become for us, the Pope concluded, a “true school of prayer.”