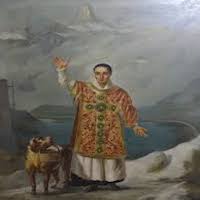 Born to the French nobility. Priest. Archdeacon of Aosta in 996. Evangelized the people of the Alps for over 40 years. Vicar-general of Alpine diocese. He started a patrol that cleared robbers from the mountains, and he established hospices for travellers and pilgrims to Rome, Italy; he established a community of Augustinian Hospitallers to staff them, and they continue their good work today. The large dogs, trained to search for lost victims in the mountains, are named for him.

Representation:
man in a mountain setting holding a bishop‘s crozier.