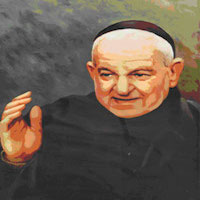 Seventh in a Christian family of nine children, the son of Vincent Preco and Nathalie Ceravolo. His father was a merchant and health inspector. George was a sickly child. Studied at the Lyceum and Major Seminary on Malta. A severe respiratory ailment in seminary nearly killed him, but he recovered through the intercession of Saint Joseph. While still a student, he began writing a Rule in Latin for use in a planned society of Permanent Deacons. Ordained 22 December 1906.

After ordination he modified his concept of the society. He began teaching along the waterfront, working with the roughest of men. He gathered a group of young male catechists, including the Servant of God Ewgenju Borg, and they formed the beginning of the Society of Christian Doctrine at Hamrun, Malta in 1907. The Society’s motto is represented by the letters M.U.S.E.U.M.: Magister Utinam Sequator Evangelium Universus Mundus! (Master, that the whole world would follow the Gospel!), and were dedicated to bringing the Bible and theology to lay people and the working classes.

Educating the working class was so revolutionary that Father George was accused of insanity, and was once ordered to shut down his operation. He caused more uproar with his plan to educate lay men and women, and send them out to proclaim God‘s word anywhere that would listen.

Society catechist centers opened in many parishes, teaching young and old, and giving children a place to stay out of trouble. Their teaching brought a deeper understanding of the faith to people who simply went through the motions of devotions, often without knowing why. The bishop of Malta approved the Society and its Rule in 1932.

Father Preca taught and wrote in Maltese, the language of the common people. From leaflets to books, George published approximately 150 works. He had a special devotion to the Mystery of Incarnation. Popular preacher, sought after confessor, and believed to have been a miraculous healer. The Society continues its work today with Centres in Malta, Australia, Sudan, Kenya, Peru, Great Britain, and Albania.

Died:
evening of 26 July 1962 of natural causes at Santa Venera, Malta
His relics are near the Society’s motherhouse at Blata l-Bajda

Readings:
Since his death in 1962, shortly before the opening of the Second Vatican Council, Blessed George Preca has been renowned for his holiness both in Malta and wherever the Maltese have settled. Dun Gorg was a pioneer in the field of catechetics and in promoting the role of the laity in the apostolate, which the Council was to stress in a particular way. Thus he became as it were Malta’s second father in faith. Embracing meekness and humility, and using to the full his God-given talents of mind and heart, Dun Gorg made his own the words of Paul to Timothy: “You have heard everything that I teach in public; hand it on to reliable people so that they in turn will be able to teach others” (2 Timothy 2: 2). The Society of Christian Doctrine which he founded continues his work of witness and evangelization in these islands and elsewhere.

Not far from here the young seminarian Gorg Preca heard the prophetic words of a priestly mentor: “Gorg, when you grow up many who fear God will gather around you. You will be a blessing for them and they for you”. Today the Church in Malta calls Gorg Preca “Blessed”, for she knows that he is for her a native source of light and strength. In his writings on meekness — his book L-Iskola tal-Manswetudni and his Letter – Dun Gorg urges his fellow Christians to follow the example of the Crucified Lord in forgiving every offence (cf. Luke 23:34). Is not this message of mutual respect and forgiveness especially needed today in Malta and in the world? Yes indeed, the meekness of the Beatitudes has the power to transform the family, the workplace and schools, the towns and villages, politics and culture. It can change the world! “Blessed are the meek, for they shall inherit the earth” (Mt 5:5).

Magister, utinam sequatur evangelium universus mundus (Divine Teacher, may the whole world follow the Gospel): the prayer of Blessed Dun Gorg perfectly mirrors the missionary mandate of the Lord: “Go therefore and make disciples…teaching them to observe all that I have commanded you”! (Matthew 28:19-20). During the year of the Great Jubilee the whole Church experienced anew the eternal freshness of the loving mercy of the Father who sent his only Son for our salvation. Was it not Dun Gorg’s ability to communicate the freshness of the Christian message that made him the great apostle that he was? Is this not what Malta needs today: clergy, religious, catechists, teachers who passionately proclaim the Good News of what the Father has done for us in Christ? At the dawn of a new millennium, the Church looks to you, Malta, to be still more ardent in living your apostolic and missionary vocation! The whole Church looks to you! – Pope John Paul II during the beatification Mass for Blessed George.