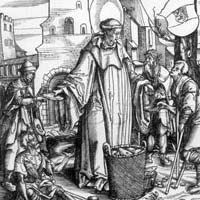 Roman martyrology: St. Adelard was born in Belgium, 751. Became a monk at Corbie and was made abbot and he was Charlemagne's counselor. Due to pressure from his cousin Charlemagne, he was forced to give up his life in the monastery and work for him. Later on, he was accused of supporting a rival power and was banished on the island of Heri. He passed away on the 2nd of January 827 after an illness.

Patron of French churches and towns. A nephew of Charles Martel, he was raised as a nobleman at the court of his cousin Charlemagne.
At age twenty Adalard entered the monastery of Cordie in Picardy, but then went to Monte Cassino, staying there in seclusion until Charlemagne insisted he return to court. At Corbie, Adalard was elected abbot and then named Prime Minister to Pepin, Charlemagne's son, the King of Italy.
He became involved in the political struggles of the royal family and in 814 he was banished to Hermoutier. After seven years of exile, Adalard was cleared of all charges and returned to the court of Louis the Pious. Adelard died on January 2, 827

Grandson of Charles Martel; nephew of King Pepin the Short; first cousin of Charlemagne. Grew up in the royal court, and was an advisor to Louis le Debonnaire. Adalard gave up the court life in 773 to become a Benedictine monk at Corbie Abbey. Gardener in the monastery. Studied under Blessed Alcuin. Abbot. Advisor to Charlemagne, chaplain, and tutor to prince Bernard who later became king of Naples, Italy. Adelard was exiled to the island of Héri (modern Noirmoutier-en-l’Île, France) in 817 after being accused of supporting Bernard’s revolt against Emperor Louis the Debonair, Charlemagne‘s successor. He died January 2nd, 829, after an illness.
He actually enjoyed the peace that came with the isolation, but was later recalled. With Abbot Wala of Corbie, he founded Corvey Abbey in Saxony.

A number of miracles were attributed to Adelard following his death, relics reported to have healed the deaf, the mute, and the paralyzed.